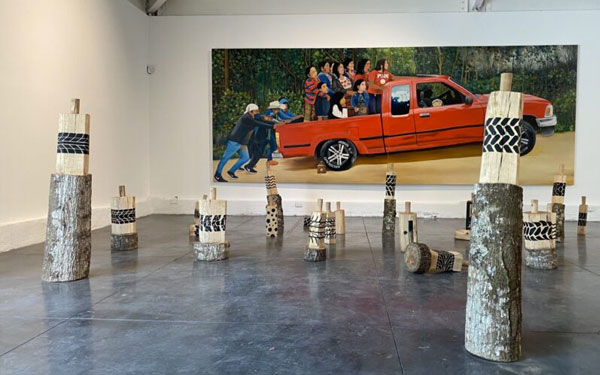 Lost. In the middle. Together was the title of the 22nd Paiz Art Biennial, held in Guatemala City, capital of the Central American country, and in the small city of Antigua Guatemala. Inspired by a publication by Dutch artist Jonas Staal about a group of refugees in Amsterdam, the title gained new meanings when it was moved to the Latin American reality, especially in a country with almost half of its population of indigenous origin.

“What is generally seen in Latin America is not the denial of citizenship to minorities, but the denial of a dignified life”, says the curator-in-chief of the edition, Chilean Alexia Tala, referring to the original peoples who “have been denied their rights to live respecting their cosmovisions, their forms of medicine and community organization”. The title also refers to the many immigrants who leave Latin America for the countries of the North, as a result of unemployment and poverty, and who live as a kind of refugees in these countries.

Raising these and many other questions, the 22nd Paiz Art Biennial, which ended on June 6, brought together works by 40 artists – among them the Brazilians Ayrson Heráclito, Detanico & Lain, Jonathas de Andrade and Vanderlei Lopes – and spread to six institutions of the two Guatemalan cities. In addition to group shows, with a large presence of local artists, two solo shows completed the event: one by Guatemalan artist Aníbal Lopez and the other by Chilean photographer Paz Errázuriz (which will continue on after the end of the biennal).

In an interview to arte!brasileiros, Alexia spoke about the Biennial’s curatorship – done by her in partnership with assistant curator Gabriel Rodríguez Pellecer -, about the Latin American political context, about the pandemic moment and a series of other subjects. Read excerpts from the interview below (the full version is available at artebrasileiros.com.br).

ARTE!✱ –  First of all, I would like you to tell us a little about how the curatorial project for this biennial was conceived and what are the main thematic axes that run through the exhibition. Within that, could also talk a little bit about the title Lost. in the middle. together?

Alexia Tala – I will start answering the second part. The title comes from a publication by Dutch artist Jonas Staal and the BAK project that focuses on a group of 200 refugees who were denied citizenship. This fact seemed to us a mirror of the situation of the indigenous communities of Central America and of the many people who are forced to migrate. People who, on the one hand, are recognized as citizens, but on the other hand, are deprived of their rights to live respecting their cosmovisions, forms of medicine and community organization. Furthermore, we also associate the title with all immigrants who we can also think of as refugees, in the sense that the main reason for migration to the North is unemployment, which is itself a form of economic violence.

What is generally seen in Latin America is not the denial of citizenship to minorities, but the denial of a dignified life, of being able to live in peace. Then came the pandemic and the title gained strength of its own

Jonas Staal’s work, the way he approaches his research and projects, was an inspiration, a kind of base from which we started to consider the Bienal as a project. Their proposals for political formation, their discussion workshops, the different ways of working at the collective level and their particular ways of problematizing served as a starting point for discussing the local, regional and Southern hemisphere in relation to the North. And, within that, its basis in inequality.

The curatorial project is divided into three thematic axes: Universes of matter; Past. eternal. futures; and Perverse Geography/Damn Geographies. All three address issues that are interconnected and that touch right there, at that point where everything is out of balance both socially and politically, where ancestral history is confronted with contemporary history and where matter and ways of approaching objects and nature are opposed.

ARTE!✱ – In your curatorial text you talk about the concept of “presentism” to refer to a kind of disorientation that we live in the current moment in the world, also related to a difficulty in looking both to the past and to the future. Could you talk a little about this idea, about how it is approached by the curatorship?

This presentism that Reinhart Koselleck talks about led us to think about a question of temporality, of analysis of the capacity and inability to envision futures at a time when – even more so with the pandemic – this false idea of ​​interconnectivity was accentuated, which at the same time bombards us and blinds us. Within this temporality is the Mayan ancestral past, which in a multi-ethnic and multilingual country where 60% of the population is of indigenous origin, assumes crucial importance.

The curatorship sought to approach this, from our place as mestizo whites, speaking from the historical context of an overdose of the present and allowing us to enter into ancestral territories that belong to these artists from the altiplano – and to the other guests. The important thing was to do this through their own voices, the artists Kakchiquel, Tz’utujil, Garífunas and Afro-descendants from different parts of Latin America, as well as artists from Africa.

The works presented at the Bienal dialogue with each other and between the thematic axes. The decision to open a space for indigenous and popular voices, without intending to be a translator of anything, resulted in a collective perception by the Guatemalan public that everything that is exposed there makes sense in their lives. And that’s the biggest reward for the team’s work.

ARTE!✱ – Regarding the selection of artists, there is a predominance of Latin Americans (35 out of 40 participants). Is this look from the Global South, and more specifically from Latin America, the main focus of the exhibition?

Yes, the focus was on Latin America, both for curatorial and logistical reasons. Although many of the works respond to the Guatemalan context, the idea has always been to take Guatemala as the mirror from which we can see all these inequalities that historically afflict the Global South. Therefore, together with Gabriel Rodriguez, my co-curator, we also invited artists such as Nelson Makengo, from Congo, Emo de Medeiros, from Benin, and Heba Y. Amin, from Egypt. The works of these three artists have functioned as a kind of connector for realities often unknown to the Central American public.

ARTE!✱ – But even if there is this regional cut, there is a production made within this vast region that is also quite diverse. How does this diversity appear in the show?

Yes, it is a very diverse and also very unknown production, as it is a very marginalized and invisible region for the global circuit of contemporary art. This circuit misses the opportunity to meet a multitude of incredibly interesting and talented artists and, furthermore, misses the chance to get closer to a phenomenon that is taking place with artists from the altiplano and their ways of approaching contemporary art from their own indigeneity – forms that, despite making terribly profound criticisms, are resolved in highly aesthetic and poetic ways.

Diversity also emerges in the exhibition from the moment we decided that 70% of the works would be commissioned, that is, new projects. We carried out previous research in order to provide artists with material that culminated in a publication entitled Paraíso (re)partido, which contains a series of themes relevant to the context, from historical issues to contemporary issues.

Foreign artists traveled to Guatemala, which resulted in a series of collaborations that emerged organically not only with local artists, but also with people from other areas, from spiritual guides and botanical healers, weavers with waist looms, poets, filmmakers, forensic archaeologists and lawyers. Ayrson Heráclito, for example, worked with Wingston González in the work Onagulei: Messenger of the ancestors. Finally, a series of other types of knowledge entered the biennale and, together with art, arrived at aesthetic solutions.

“Presente”: a publication that emerges from caring and dialogue

Collaborators of the issue #55

A book of many hands, minds and lives