In Ocupar os memes é preciso, the researcher and professor of University of São Paulo, Giselle Beiguelman, resumes the origin of the word “meme”, tracing it back to a time before the internet. The name we use today was coined by the English biologist Richard Dawkins, in 1976, in the book The Selfish Gene. In Dawkins’ theory, as Beiguelman summarizes, “the meme is a replicator unit that spreads by imitation, always subjected to mutation and mixing, and that functions as critical resistance”.

Dislinking itself from its origin, and “back to the future”, the meme as we understand begins to appear in the 2000s and spreads with sharing via social networks. Far from being restricted to pop culture, memes have taken roots to other fields, such as politics, and, gradually, have been operated by propaganda and advertising.

Without imprisoning them in a categorical definition, Beiguelman rather points to their frequent composition: “They present a format in which the text does not function as an explanatory complement to the image nor the image serves merely to illustrate the text, but the two elements chain themselves together to produce a third sense”. On Instagram, in particular, another visual element is included, positioned in a certain “between” – neither completely inside or outside the post – which is the location of the photo, used more and more to add depth to the joke. “Low resolution, bastards and without signature; [memes] are poor images, in the sense given by the German artist and essayist Hito Steyerl to the expression, which can act as a counterpoint to the dominant representation systems”, Beiguelman describes. The Brazilian profile New Memeseum is in line with the argument when it indicates that memes possibly help to formulate narratives different from the hegemonic ones. “Maybe show their unfoldings, contradictions and oppositions”. For them – whose identities are preserved in anonymity – the power of memes lies in their fictional character. “Paraphrasing Karl Ove Knausgård, maybe we are trying to combat fiction with fiction”. At the end of the second volume of the Norwegian writer’s series My Struggle, it reads – and the New Memeseum quotes: “It was a crisis, I felt it in every fibre of my body, something saturating was spreading through my consciousness like lard, not least because the nucleus of all this fiction, whether true or not, was verisimilitude and the distance it held to reality was constant. In other words, it saw the same. This sameness, which was our world, was being mass-produced”.

With regard to this counterposition activity, Cem A. (also known as @freeze_magazine, in parody of the British art magazine) presents the possibility of memes as agents of change, although not in a revolutionist way, but reformist. “Memes should be seen as a tool to popularise forward-thinking ideas. Their popularity can give us the upper hand in the conversation. This is where their strength lies. The crucial danger here is how they might be absorbed by the art market. If memes were commercialised with a short sighted approach, this would only make them less popular, genuine and efficient. It would make me question if they could be considered memes at all”.

When the establishment begins to swallow memes (which, until then, resisted it with acidic and humorous criticisms), do they lose strength (by integrating what they once have challenged)? An important observation is made by Hilde Lynn Helphenstein, creator of the virtual character Jerry Gogosian (the name alludes to two recognized figures in the art world, the critic Jerry Saltz and the mega gallerist Larry Gagosian): “The ways in which I plan to monetize what I’ve created with @jerrygogosian will be a means to achieve a version of the art world I can live with on a micro-scale. My artistic achievements will be perpetuated by the capitalist machine and I have no problem with that. An artist has to dream big (and eat)”.

“We are not sure whether the institutionalization of memes can cause any impact or change for content creators”, notes New Memeseum, when considering that, perhaps, the impact is on the institutions themselves, who, “by looking with less distinction between high and low culture, are incorporating languages that can attract new audiences into their programming”. Digging deeper, they question whether the narrative could not be told in reverse: from the perspective of social networks, it may be that museums and galleries are the “spaces of exception”, precisely because art is still somewhat inaccessible to the majority of the population [at least in Brazil]. According to what they observe in today’s scenario, institutions have started to seek their space on the Internet, investing and worrying about their virtual platforms.”There is a desire for audience engagement. The economy of likes has also impacted the sources of sponsorship – let’s remember the cultural edict that, recently, assumed as criterion the sum of social media followers of the members from each project”, they add. With these questions put on the horizon, they point out that New Memeseum (in the same way as Jerry and Freeze) is an Instagram profile and, as such, works within an app managed by a trillion-dollar conglomerate. “We also live under the regency of algorithms”.

Under such regency, is humor an effective format to face the established powers?, asks Hilde, to which she herself responds negatively. “Being the jester who states the obvious to the court in the presence of the king is still beholden to the king. Humor is a medicine which temporarily soothes the pain of those not in power and creates the illusion of taking back control. Taking money from the powers that be and redistributing wealth is probably the only way to “win” in late stage capitalism…but it feels good to laugh, whether you’re winning or losing”. In The Value of Laughter, Virginia Woolf expresses that laughter preserves our sense of proportion, recalls New Memeseum. In Woolf’s words: “Dogs, mercifully, cannot laugh, because, if they could, they would realise the terrible limitations of being a dog. Men and women are just high enough in the scale of civilisation to be intrusted with the power of knowing their own failings and have been granted the gift of laughing at them”. In that same text, reminding us of the importance of proportion, the British writer ends up also mentioning the nonexistence of a “complete hero”, the one who needs to be put on a pedestal.

The “complete hero”, does it look like a pretension familiar to some figures in the art world? Such self-mythologized characters, not rarely, make up the cast of this memetic play. Is it possible, though, to get them off the pinnacle and back to proportion? “We don’t know if the satire of institutions and their characters by arts-related memes make these same characters/elements more accessible”, confesses New Memeseum. “Perhaps, it makes more visible the narrative plot in which they are involved: the problems, weaknesses, contradictions, professional and personal dramas etc”.

If not to demystify the linguist, can memes decode their language? For Cem A., memes can be useful both for communicating complex ideas and for criticizing inaccessible texts – frequent in the art world – when they don’t fight hard enough to win their reader. To the latter, Hilde refers to as “show off texts where people are really proud to show you they have a master’s degree in polysyllabic words”.

“I think that this sort of language is used as an intimidation tactic and rarely are the people wielding this language in full control of what they say. If they were, they’d say much less in a smoother, more palatable way”, she states and, wittily, poses the question: “Have you ever heard of a meme?”. According to Jerry Gogosian’s creator, “you do need cultural literacy to understand memes as well as a general sense of the topic, but you can learn to read them rather quickly and there’s not grammar to learn (please see how poorly I spell in my memes)”.

For New Memeseum, the memetic panorama is too diverse to state categorically that memes make something more accessible, and can be as or more truncated than many curatorial texts or artists’ speeches. “Sometimes the reception of memes ranges from ‘ok, I get it’ to ‘what does that really mean?’ – there’s a wide spectrum between transparency and opacity and that makes this language so interesting to work with”.

Such nuance combined with humor allows memes to address important issues, sometimes relegated by consolidated media and/or cultural commentators. The anonymity of the producers of memes (Hilde had her identity revealed against her will, in fact, in an Artnet article, whose writer did not get the memo, nor the joke) along with their irreverence and the release from the pretense heroes of the art world, really allow them cross narrower corridors.

“  It is nearly impossible to run a sustainable business in the art world. Media outlets are included in this too. So I can see why their editorial choices tend to be conservative. Having said that, I don’t agree with their approach at all”, says Cem A. when I mention the case of the exhibition Arte em Campo, held in late 2020 and reported on with the neutrality of a detergent. The event brought together about 25 galleries and 54 artists to celebrate the “new Pacaembu”, the result of its concession to the private sector for 35 years. It was the opportunity to “say goodbye” to the beloved stadium that would have, months later, the area that housed its most affordable tickets demolished. Curator Pollyana Quintella tells she wondered what role the exhibition played there, in addition to camouflaging, “sophisticating” and providing “a cool façade that would justify interests that were far from the ones favoring the city [and the public interest, rather than the private sector]”. Therefore, this kind of news – or distribution of “merely carefully crafted pieces of PR”,” as Hilde describes it – also gets on the radar of meme creators.

Taking advantage of the busted art ♡ neoliberalism affair, Cem A. does not cease to draw attention to the “invisible work” of digital projects: “People often overlook the time and effort it takes to put together a digital project. Memes are included in this too. The pandemic showed us that the internet is now an integral part of the art ecosystem and often can reach bigger audiences than what is possible in the physical world. We need to do more to address the financial inequalities in this paradox and compensate digital-first artists more fairly”.

To approach the elephant in the room before finishing this article: after all, memes are art? “We often think that, no matter how far away, they have some connection with the conceptualism of the 1960s and 1970s, especially with regard to operations performed between word and image”, notes New Memeseum. Cem A. believes that memes should be recognized in the context of art because they carry aesthetic and conceptual qualities. “However, this doesn’t necessarily mean they should be considered artworks or as ‘contemporary art’”, and stresses: “In fact, we should collectively question the assumption that contemporary art stands on a higher level”. This and the other issues mentioned above might still gain momentum. “We believe that nothing has been exhausted [in relation to memes] because, in art, these debates have barely begun”, the Brazilian meme creators reiterate.

Read more about art and the digital world, click here. 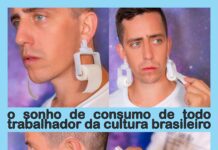