We are used to thinking about grief as a finite process, limited and circumscribed in time. When they go on for a long time, they become suspicious and flirt with the pathological. Even so, there are mournings that span generations around slavery, political disappearance, state violence. There are traumatic mournings that touch entire cities like Mariana or Santa Maria. There are mourning for the loss of land, of the body and of our way of life, such as the one that affected indigenous and riverine people such as those affected by the Belo Monte dam in Altamira. For Freud, grief is a symbolization device and a normal affect. But what exactly is normal affection?

Wouldn't it be better to reserve the notion of infinite grief for certain irreparable situations? Recognizing that in them loss is indefinitely non-individualizable, non-symbolic and non-replaceable? In Freud, such incurable mourning is marked by the violation of the generational order of disappearances, for example the mourning of a child. Mourning that cannot be overcome by the force or intensity of the pain, but by the more or less conscious deliberation that in this case, in this mourning, there will be no end. He will perpetually and deliberately link himself to other endless, disembodied, graveless mourning. A finite mourning becomes infinite for many reasons: a lost life elevated to the dignity of a Thing, common value for future lives, heroic ideal, saint, sage or warrior that mimics immortality as a figure of the infinite.

But there are also bereavements that are pathologically finite. In fact, this is the neurotic response in the face of loss: to individualize the culprits, to hate to forget them, to issue rules in the illusion of “unhappening” them, finally, to make it simple to share, collectively, the reasons, causes and motives for the loss. After that, all you have to do is wait for another evil from the Other, or for another vacillation on the part of the subject.

Losing a person, a nation or an ideal makes a difference, even if grief applies to all three cases without distinction. When we lose people and lose the spirit of a nation, we have often resorted, throughout history, to a name for what was lost: democracy. Some will say that the idea of ​​democracy originated in antiquity was realized in institutions of modernity. Others will argue that this is an incomplete achievement, as democracy remains the ideal, that is, the idea of ​​a community to come, capable of being-for-all and including all.[1]. Still others consider the application of the idea of ​​democracy to people and ideas to be a falsification of the term. Democracy never existed, therefore it never will. It's just a name we give to certain non-autocratic political regimes. The Brazil of the years 2013-2020 has been described as a country in regressive democracy, that is, marked by the precariousness of institutional functioning, retraction of the free use of the word and violation of human rights. Losses that demand local mourning, but that are connected with the chain of infinite mourning that organizes and defines a certain symbolic unit.

There are artists, like Anselm Kiefer, Alfredo Jaar, Nazareth Pacheco and Itamar Vieira who specifically dedicated themselves to the work of mourning and reparation, as well as there are ethical witnesses of unspeakable disasters, such as Sojourner Truth, Primo Levi or the compilation of dreams made by Charlotte Bernhardt, but their message really becomes a commitment to the future when it implies a kind of deal between the living, the dying and beings to come. This commitment goes below and beyond legal forms and economic exchanges. Just as there are lives that appear to us as not entirely finished, like Marielle Franco, and worlds that have not yet been created, the ethical-aesthetic act seems to fill the infinity of what is priceless and surpasses our system of finite values.

The notion of infinite grief was introduced by James Godley[2] from his historical studies on the massacre of 20 thousand people in the American city of Buffalo, during the American Civil War (1861-1865). Examining the journalistic and testimonial accounts of the occasion, he arrived at the idea that such a high number of dead, in relation to the surviving population, could only arouse a feeling of de-individualized and infinite grief. In other words, the combination between the mourning of one and the mourning of the others with which one lives is so extensive and intense that from now on mourning will become the dominant feeling in this community. The survivors rebuild their lives, the affect of sadness diminishes, but the remaining narratives remain determined by this collective loss. Indemnification, reparation or return to the social bond ends up happening only through the passage of generations and becomes one of the most insidious problems in the clinic of collective mourning. It remains to be seen whether we will have a source community or a destination community.

Melanie Klein introduced the concept of reparation in psychoanalysis from two main connotations: retaking a place (Restoration) and make something good again (Wiedergutmachen). It all depends on the concept of object you have in mind.[[3]: ethical, aesthetic or political. reclaim a place, in the sense of reestablishing himself, responds to mourning as a trauma, as a “loss of the ground” and as an “exit of himself” in the moment of pain and transient madness that accompanies the first movements of mourning. One place it is a symbolic instance, referring to the structure and history that positions us in relation to the Other. make good again, is a process related to the recovery of pleasure, satisfaction and enjoyment. For Melanie Klein, reparation can be defined, in opposition, by the following processes:[4]:

Reparation is the antidote to grief, but also to the processes that attack our ability to love and to what Klein called the paranoid-schizoid position. This position is understood as the process of object splitting, which causes the fragmentation or partialization of the Self. Super invested in its narcissistic place, pursued with hatred and guilt by sadistic or masochistic fantasies, the ego tends to defend itself from anguish by mobilizing strategies such as projective identification and splitting (splitting), the basis on which the phenomena of negationism arise. The process of recovering the place of the self, with the reduction of idealizations and projections, therefore involves an integration of the object. The partition between good-pleasure and ill-displeasure will give rise to a new unity, with the correlative acceptance of “bad-displeasure” within the Self itself.

Post-Kleinian authors have observed that this rehabilitation of the object for pleasure and this recomposition of the object for the relationship explain a certain disposition to aesthetic sublimation, which accompanies the depressive position. Writing, producing images and creating sensory effects create a converging perspective between the mimetic line and the cathartic line of reparation, henceforth associated with the depressive position. In this sense, grief is resolved when it is transformed, through reparation, into an ethical and aesthetic unit. This can be verified empirically in the symmetry between what if "say-do" and the way if "say-do". Congruence between form and content that constitutes an expected criterion for monuments, museums and works of art that offer themselves in a restorative function.

A good synthesis of this argument will be found in the Japanese practice of katsugui, whereby a piece of pottery, usually a household utensil, can be repaired through methods so specifically implicated by the repairman that the product becomes even more valuable and unique than it was before. O katsugui has been used by many mourning scholars[5] to exemplify the process of reparation that mourning demands, especially the fact that at the end of the mourning end it produces a sensation and pleasant release. Such kind of reparation requires a specific ethics to be understood, for example, the ethics of whabi-sabi, where the valorization of precariousness and simplicity in the art of living are central elements. The notion of resilience is insufficient, as it is not a matter of knowing whether a person is capable of returning to the initial situation without major deformation, but of knowing whether their ability to dream and transform themselves into material and a different form survives the process of loss. and to know, at the limit, if the loss itself has taught us something about it.

Just as the Kleinian concept of reparation emphasizes love and enjoyment, but not desire, the concept of object a in Lacan it will begin with reference to desire and then become agalma amorous and then still object enjoyment. For Klein and Lacan to repair is arrange (in an aesthetic sense) and to repair (in an ethical sense), that is, to bring together the ability to love and be loved, with the intrinsic satisfaction obtained in the process. However, this does not seem enough to think about the dimension of common life, overcoming resentment and future reparation, for which the political dimension of desire is the most common expression. Veena Das in studying the massacres between Hindus and Sikhs, during the partition between Pakistan and India, but also when researching how the “repairs” (healers) understand their task as both a gift and a curse[6], realized that mourning in the context of injustice, violence and suspension of democratic processes depends not only on how the community defines past guilt and present responsibilities, but fundamentally on how it creates a common future. The children's narrative, as well as the testimony of the survivors, become fundamental agents of this process. The big question for those who experience infinite grief is not whose fault or responsibility it is, but "how to live together… with it". 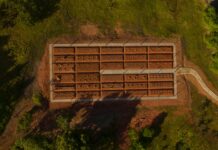 Hunger and violence are themes of the new works in the collection at Usina de Arte, in Pernambuco 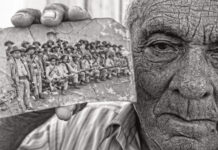 The cangaço yesterday and today 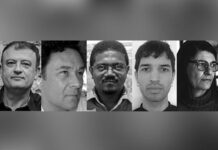 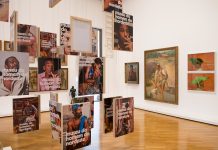 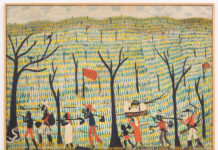 Exuberant visuals in a critical tone 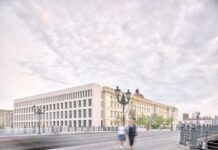 European fetishism in the colonial context and its long-term effect: the case of the Humboldt Forum