The timely exhibition by Sérgio Sister at the Galeria Nara Roesler in São Paulo ( until October 5), featuring paintings he made in the late 1960s and drawings produced in prison between 1970 and 1971. Timely for at least two reasons: firstly, in those days when they try to deny the misdeeds committed by the latter Brazilian civil–military dictatorship (some of which seek to deny that it has in fact occurred), it is didactic to put the public before the testimonies of victims of that period that will never be erased from the country’s history; A second reason for the relevance of the exhibition is that it presents the first two moments of the trajectory of a very young artist (Sister was born in 1945) and that, over the years, would be recognized as one of the main references of painting. in Brazil.

In the first group it is amazing the liveliness that emanates from those paintings that, aware of the buzz of the metropolis, the scourges of mass society and the dangers of dictatorship (which gradually showed its face), demonstrate the belief in pictorial doing, believe in what report and how they report. In them it is remarkable how Sister – like some of his generation colleagues – could filter and make them his own, the then most fashionable strand codes (the Pop, the New Figuration, etc.), all riddled with a kind of country architecture. plastic – that can be associated with the structure of the comics pages – nothing takes me out of my mind that could be equally debited to the concrete experience, still strong in São Paulo at the time (perhaps the same debt of Claudio Tozzi, in his early productions). 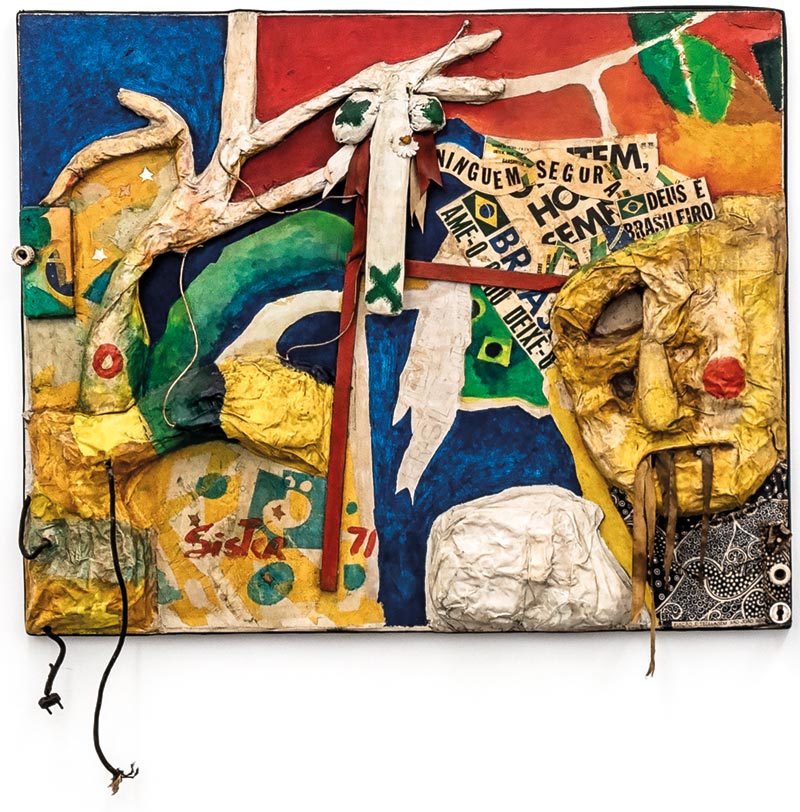 This strong conception, however, liquefies itself in the drawings produced by Sister during his time in the old Tiradentes Prison in São Paulo, with a sad memory.  If in the immediately preceding paintings there was a kind of affirmation of the discourse, a youthful voluntarism full of liveliness and irony, in the acute drawings made in prison, the architecture of the scenes tends to fade away, leaking in the corners (in this sense, a particular drawing,  which shows the Brazilian flag in dilution process, seems to me emblematic).  The paper plane receives countless situations, as recorded under the hood.  There are several scenes produced in the form of collages, in which the artist attests to cynicism, barbarism, torture – tragic scenes and – amazement!  – full of almost sad, fierce humor.  Although serious and important as insurmountable testimonies of the state’s action on the average citizen, these drawings are more than that, and do not fit as solemn emblems of that situation in which the artist was a victim among so many.  They are documents of a crime, of course, but also their own overcoming.  They act as the best answer to agency because they ridicule it while questioning themselves.  These drawings refuse to mean mere documents about the barbarism suffered, to act as critical reworkings of the evils they point to, not to be overwhelmed by them.  They are weapons of resistance.

As mentioned, after five decades, Sérgio Sister’s work is pointed out as one of the main references of current Brazilian painting, and apparently has no reference to those early career productions: neither the denunciation of his early paintings, nor the critical content of his drawings.  Do people really think so?

In recent years, Sister’s production has been characterized as an affirmation of certain constitutive elements of painting, revered in modernity, as strategies for the delimitation of his own field: the reiteration of two–dimensionality, the emphasis on the act of painting and the planned use.  monochrome to emphasize all these peculiarities.  No representation – the painting does not represent the real, it presents itself as a new data –;  no stricter color – the lower tones tend to reinforce the planar dimension of the painting and enhance the indices of the painter’s action on the surface.

However, the distance between the two moments of Sister’s production tends to shorten when one analyzes the artist’s structuring of his early career paintings.  There, perhaps, the teachings of the Brazilian constructive currents informed the way the artist designed the pictorial field, dividing it into a kind of grid that resonated the structures of those strands, dividing the field of support into communicating but autonomous areas.  Now, looking at his recent paintings, it seems that Sister focuses his attention and works on each of these particular areas, detaching them from the overall body of the grid, making them reach their leading role.

Is it hard to sustain this proposed link for the two moments of the artist?  It may be, as this is a matter of seemingly pure formal interest here, as if to justify Sister’s alleged lack of current engagement with the political and social situation.

Wrong.  The austere and rigorous paintings that Sister produces today keep the same role of resistance weapons from the paintings and drawings of his early period.  In affirming the specificities of pictorial language – so dear to modernity – the artist’s most recent production seems to be at a critical distance from the co–optation that the practice of painting has suffered in the last decades, almost always easy prey to the process of alienation to which it comes.  being submitted – a more than plausible index of the process of alienation and brutalization that our society suffers today.