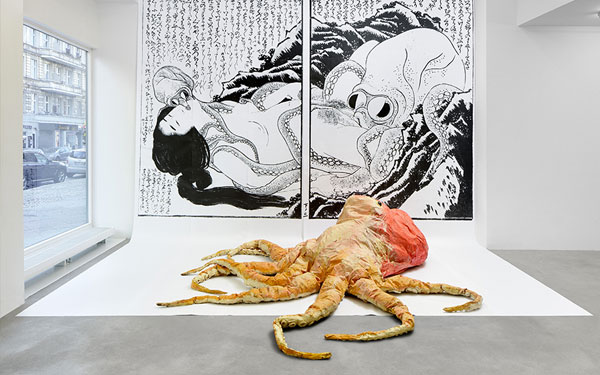 The impact caused by the Covid-19 Pandemic has caused unimaginable changes. The perplexity of the present, arising from the protocols of confinement and temporary closings of galleries, museums, fairs and biennials, has shaken the art system since the beginning of last year. In this context, the challenge of overcoming the crisis and finding a way out of the unexpected collapse led to the creation of the collaborative platform Galleries Curate: RHE. The idea came from a group of gallery owners linked to the committee of the three Art Basel fairs – Miami, Hong Kong and Basel – with the idea of promoting simultaneous virtual exhibitions in galleries all over the world, in support of the community.

The first exhibition has water as its theme and was suggested by the gallery owner Chantal Crousel, from Paris, one of the first to embrace the idea. The group highlighted the undeniable limitations that their spaces were experiencing at that time and decided to change the scenario with a dynamic virtual dialogue between the individual programs of each gallery, whether in Jakarta, Brussels, Singapore, New York, Rio de Janeiro, Tokyo, or Paris.

The only Brazilian gallery that is part of this international pool is A Gentil Carioca, from Rio de Janeiro, directed by Márcio Botner, one of its owners. Engaged in the Art Basel Miami committee, he is a globetrotter on the circuit, connected to several projects around the world and one of the most animated with Galleries Curate.

“The idea was born from the virtual contacts of a group of 12 people and it impressed me when we soon reached 21 participants”. Involved in so many projects, he believes in horizontal collaboration between artists, gallery owners and critics, uniting people who think closely to the group’s goals. Each gallery proposed what they wanted to show and they started the exhibitions earlier this year. “What is happening is something special. While we have established dealers, we have young enthusiasts with less time in the market. The platform began to be publicly thought of this year and people are now getting to know the project better.”

French Clément Delépine, young coordinator of Galleries Curate: RHE and co-director of the Paris Internationale fair, also mediates part of the project’s lives. For him, since the first negotiations, these conversations are constituted as group therapy. “The project has in its title the enigmatic symbol RHE, a measure of unity and impermanence, defined by two Greek words: panta rei, which means ‘everything moves”. Delépine draws an analogy between the water element, fundamental in our lives, and their effort to create alternatives in the global crisis. The work transcends hosting online exhibitions, a digital platform, as there is also a concern with archiving materials related to the works on display. When new content is added, past and current projects are mixed.

The exhibitions have multiple themes and most talk about the environment. In the Tempest group show, at the Tanya Leighton Gallery in Berlin, the artist Monster Chetwynd stands out for shaping the figure of a huge octopus made of latex, painted and lasciviously placed on the floor. The installation is completed with the woodcut – enlarged in xerox and fixed to the wall – of a copy of the erotic series The Dream of the Fisherman’s Wife (Kinoe no komatsu), by artist Katsushika Hokusai, executed in popular shunga printing in the 19th century. Monster Chetwynd’s life touches on the poetic, performance she identifies with. In a game of identities, the Glasgow artist changes her name from time to time, as did Hokusai, the artist she reveres and who throughout her life has had more than 30 names. The water here presents itself as a metaphor, dream or mythical delirium of an unexperienced jouissance.

From a more programmatic perspective of the ecological movement, Galleria Franco Noero, from Turin, shows Simon Starling’s film Project for a crossing of the Rift Valley. The still, composed of paradisiacal images, poetically registers a canoe, built with magnesium extracted from the Dead Sea waters used in 2016, in an attempt to cross it, departing from Israel to Jordan. The experience advances in several directions and reveals that in this stretch, located in the Rift Valley, the water is highly salty and that the place stands out for being the lowest on the planet – it is 427 meters below sea level. He also warns that the region is heavily exploited for keeping special mineral wealth: a liter of water contains 45 grams of magnesium.

There are works philosophically engaged in the symbolism of time and its duration. The Jean Mot gallery, in Brussels, shows the video Canción para Lupita, by Francis Alÿs, from 1998, an animation in 16mm. The water moves in Alÿs’ poetic itinerary throughout the film. A woman pours water from one glass to another repeatedly. The action of doing and undoing is accompanied by a song whose phrase Mañana, mañana és breve para mi can suggest an extension or continuous hope for the future.

The gallery A Gentil Carioca, in Rio de Janeiro, harbor of astral fantasies and renewing experiences, shows Descompasso Atlântico, by Arjan Martins, which takes place in two places and with different poetics. Inside the gallery, the paintings maintain a narrative focus on both the slavery heritage and the current situation of the black population. In the open air, right on Ipanema beach, Arjan Martins creates a colorful installation of geometric inspiration that converses with the Atlantic Ocean, an old route for slave ships. Composed of five windsocks, objects commonly used in airports to control the wind, the installation brings in each one of them a symbol of maritime warnings: man overboard, dangerous cargo, etc. The gallery purposely opened the exhibition on April 22, the day on which, in 1500, Portuguese colonizers landed in Brazil. The ideology of survival traversed by Galleries Curate: RHE makes the declarations of intent of this group an expanded space to see and register the new normal.