For Lisette Lagnado, one of the four curators at the 11th Berlin Biennial, the new coronavirus highlighted even more issues that the event itself, whose official opening took place on September 5, three months late, had set out to discuss in 2020 “We were talking about necropolitics, fanaticism, capitalist patriarchy, extraction and ecological devastation. The pandemic only came to deepen the gap that separates the countries of the global south from the place where we are,” pondered Lisette in her opening speech at the VI International Virtual Seminar ARTE! Brasileiros.

The conversation was mediated by the journalist Fabio Cypriano, with the participation of the Spanish Agustín Pérez Rubio (from the curatorial team of the Berlin Biennial, alongside Lisette, the Chilean María Berríos and the Argentine Renata Cervetto) and two of the artists selected for the exhibition , the Brazilian Aline Baiana and the Guatemalan Edgar Calel.

Still at the opening, Lisette expressed some discomfort with the seminar’s subtitle, The Art of Possible. “Our job as producers and cultural agents is always to deal with the impossible,” she said. “It is very difficult to put the concept of solidarity when an international, European biennial announces its dates, despite the fact that the artists are still in lockdown in the countries of the global south. I wanted to draw attention to the violence intrinsic to the initial decision to make the biennial happen in 2020 “.

For the curator, the “most substantial chapter of the biennial” – whose epilogue, entitled The crack begins within, will be shown until November 1 in the German capital – had been opened in September 2019, with workshops, small exhibitions and performances, in the Berlin Wedding neighborhood, in a space that proposed listening and exchanging with local residents, mostly immigrants.

“There was a whole dynamic of being together and suddenly we were interrupted in this way of working”. It was necessary, continued the curator, to create what she calls an ethical protocol: “To say that we would not give an inch in our position and, in this sense, the word possible is dangerous because it may seem opportunistic. Rosa Luxemburg said that opportunism is the art of the possible. And I want to insist that, when doing a biennial in these conditions, we have to worry about our own principles. And don’t bend to those dictated by an exceptional situation.”

In the virtual seminar, Lisette exemplified the political weight of the show, initially presenting the American Marwa Arsanios and her trilogy Who’s afraid of ideology?. The work reflects, said the curator, an ecological feminism that since 2017 marks the work of Marwa, together with women who participate in movements for the fight for land, in places like northern Syria and Colombia.

“[It is something that] recontextualizes a feminism of the 1990s, which concealed the ideological analysis by stating that gender equality was already a step over,” she said. “With this criticism, Marwa went looking for a feminism beyond a kind of liberal middle class life, which she found in ecological activism. In this film, the rural area is the territory where the fight for land takes place and where these women are also guardians of seeds, water sources and biodiversity. We see here an example of the figure of a caring and activist artist.”

Marwa’s activism ends up finding echoes in the sphere of contemporary art, also regulated by the logic of extraction, said the curator. “I bring, like her, the concern to avoid transforming these precarious lives into commodities worshiped at international biennials. How to prevent the appropriation of these genuine knowledges from turning into something else through the exploitation of others’ sores”.

The cross of colonialism

Aline Baiana began her participation by questioning the difficulty, on the part of science, of perceiving Afro-Brazilian or indigenous knowledge as such, relegating to these perspectives a fabulous character, often in children’s books.

“What I try to do with my work is to share these understandings of the world and to tension them with the Western understanding, hegemonic […] a way to collaborate for the anti-colonial struggle”, explains Aline, who presents in Berlin the installation The southern cross.

“This work started, as an idea, when the environmental crime took place in Mariana [the Brumadinho dam burst in January 2019]. I was shocked and disturbed seeing those images of the river dead by a company that has already taken its name [Vale do Rio Doce], which made me think of this place of infinite exploration that Brazil and other southern countries occupy. And as the mining risks are obliterated from the final product, they are left to the populations. ”

The choice of the work’ name also contained a criticism: the constellation, symbol of Mercosur and present in flags of many countries in the hemisphere, represented as a cross, from a Christian perspective, in a colonizing act.

Aline also explained why the idea of “art of the possible” bothered her, remembering two phrases: “It is easier to imagine the end of the world than the end of capitalism”, by the British Mark Fisher, in the book Capitalist Realism. “We live in capitalism, its power seems inescapable – but until then, the divine right of kings also seemed. Any human power can be resisted and changed by human beings. Resistance and change often begin in art”, by American Ursula K. Le Guin. “What I think as an artist is that the role of art is perhaps to provoke reconnections, to imagine other possibilities”, concluded Aline.

In his speech, Edgar Calel initially considered that we are the product of nature and the ancient cultures of the world, such as the one he was born and raised in Guatemala. The artist then read an excerpt from an account of the creation of the universe according to Popol Vuh, a Mayan documentary record from the 16th century.

“Under this panorama of ancestral indigenous literature, it seems interesting to me how, through art, people are able to cross different physical and time spaces, and with that we unite ancient and contemporary situations, with the need to listen to the past for project the future. Part of my job is to do these physical and temporal journeys as well”, said Edgar. 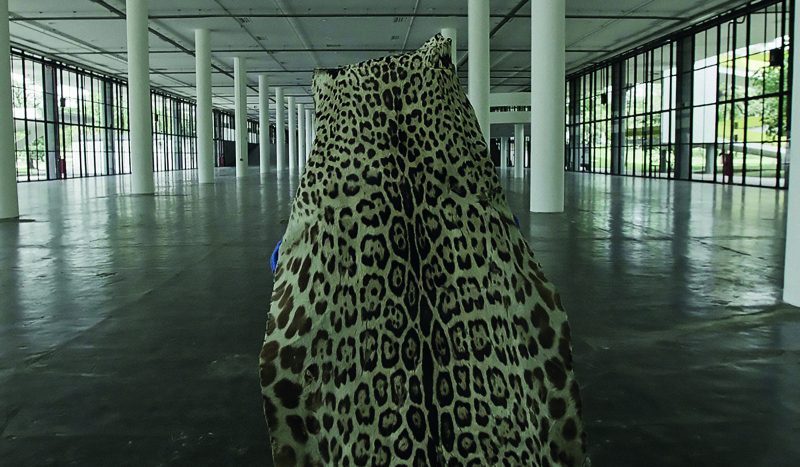 The artist took the video Sueño de obsidiana to the Berlin exhibition, made in collaboration with São Paulo native Fernando Pereira Santos. In it, Edgar represents an indigenous ritual linked to the land, having as scenario one of the icons of Brazilian modernist architecture, the Bienal building, in São Paulo. With the skin of a jaguar, his animal spirit according to the Guatemalan tradition, or a blue sweater, which is displayed in the daadgalerie, and in which he sewed the names of the indigenous languages of his country, the artist speaks of anti-colonial resistance through reconnection with ancestry.

“Taking this walk in that concrete building, being an indigenous person of Mayan descent, is a statement about the destruction of the limits, the borders imposed between countries like Brazil, Paraguay, Bolivia, etc. We are all one. This, for me, is something fundamental, that we must contribute to this other possible world”, he argued.

“This is a biennial of sensitive capital, of relationship capital,” said Agustín Pérez Rubio, when he began his participation. “And also, what perhaps the pandemic has made us value it more, an idea of cure, of a healer, not only of healing anything, but of accompanying, caring,” he said.

Agustín used the image of Edgar dressed in jaguar skin, in the Bienal building, to talk about another section of the Berlin exhibition: fanaticism and the god of capitalism, of the internet and, in the case of the Guatemalan artist’s work, an idea of contemporary art church, incorporated by the modernist construction. According to him, it is important to open cracks in institutions such as the biennial and museums, for these questions: “For artists like Edgar to show us how, in an icon of Brazilian modernity, the denial of knowledge, which has been segregated for years, is implicit”, argues Agustín.

The curator then mentioned the work of Antonio Pichillá, also from Guatemala, presented at the Berlin exhibition: the video Action of a tree character, shown at the Gropius Bau, which houses the segment The inverted museum of the biennial, an attempt to “counter-narrative” to the Eurocentric perspective on art. “To understand how this colonial vision is perpetuated by the institutions,” said Agustín, citing the Humboldt Forum, a museum space that will open later this year in Berlin.

Agustín also criticized the reception of the works by German journalists: “They can only see the ethnography of these works and fail to consider them from a philosophical, aesthetic and artistic root as contemporary works. Or, for them, they are works with something esoteric. It is very interesting to see that all these critics and German culture have allowed this racism and this way of seeing otherness to be perpetuated, based on their Eurocentric ethnography”, he said. “And since esotericism in Germany is very close to the extreme right, they prefer not to talk about these works”.

How, then, to avoid the extraction of biennials and other cultural events? How did the curatorial quartet at the Berlin exhibition deal with the issue? “Patriarchy, colonial sores, are suffocating us, and we have to react even with violence. On the other hand, there is a question of care. So, how to be violent and, at the same time, welcome other voices, and these more vulnerable lives? What always guides me is a mixture of intuition and ethics. And in that sense, listening has been our compass”. For Agustín, in addition to listening, a non-extractive way would be to understand that you take something, but also return it. “The idea of restitution, with artists, communities, vulnerable museums”, he concluded.

Get away from the self-centered subject; produce art in friction and difference

VI International Virtual Seminar ARTE!Brasileiros: In defense of nature and culture – the art of the possible