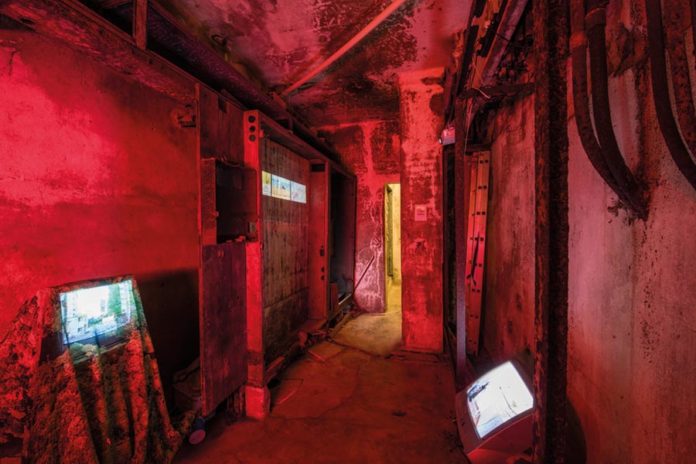 At the modest entrance of 427 Álvaro de Carvalho Street, in downtown São Paulo, it is Dona Irene Silva who honors the house. She lives there, taking care of the entrance during the day, where about 500 residents of 120 families pass daily to enter the 9th of July Occupation, managed by the Center’s Homeless Movement (MSTC).

In addition to the entrance, Dona Irene also takes care of the garden and garden of the occupation, “great hands that when they plant everything gives”, as the artist Lourival Cuquinha wrote, when answering my message requesting her name.

It is Dona Irene, with a smile on her face, which indicates how to get to the ReOcupa gallery, where the show What is not a forest is a political prison, with about 100 artists, including Cuquina himself. Art in the central space of a space of resistance. I felt in Bacurau.

The show, which runs from Wednesday to Sunday, from 2 pm to 8 pm, has been held since September with 74 artists, 15 of which were added in October and now in November another group will be added. It is not known exactly how long it remains, but it is safe to see until the end of the year.

Artist is the proper term to name who participates in it, even though not everyone there has their main activity in art. There are internationally recognized figures in the art circuit, such as Ernesto Neto and Renata Lucas, among others who live and produce in the Occupation itself, while others stand out in nearby areas, such as photojournalist Marlene Bergamo or philosopher Peter Pál Pelbart. However, this is the best place to put into practice Joseph Beuys’s famous expression that “every human being is an artist.”

Despite the 89 names on the maps that indicate the layout of the works in the exhibit, at least two dozen also participate in interventions along eight other floors of the occupation – the ReOcupa gallery is actually on the ground floor of the building, where the entrance to 9 de Julho avenue, which is not in use, and its surroundings.

With 14 floors, the building was built as the headquarters of the INSS in São Paulo, inaugurated in 1943. Designed by Jayme Fonseca Rodrigues, the building is one of the icons of São Paulo architecture during the Vargas Era, president honored with bust in the entrance, which disappeared after throughout recent history. Since 1997, occupations have taken place there after 20 years of neglect, and the current one, organized by the MSTC, began in 2016.

In it, artists have been collaborating organically since the beginning. The Rigging, for example, which emerged in 2016, when Funarte began to be shut down by the Temer government, helped to organize the communal kitchen, which prepares festive lunches once a month, and has been important for maintaining the building’s condition.

In the gallery, who speaks of the works is Felipe Figueiredo, monitor and activist who lives in the Occupation since its first moments in 2016, and who knows not only about each work, but about the history of the movement itself. He develops his narrative from the importance of carrying mattresses in the early hours of an occupation to stimulating the visitor to listen to Georgia Miessa’s Serenade of Love, a compilation of macho songs in Brazilian popular music since 1920.

Living in the Occupation, Felipe guarantees a close link between artistic production and its context. Not that works are placed there outside of space, as if it were a white cube. Far from it. But it is precisely this vital character triggered by occupation that gives particularity and relevance, and Philip’s voice is essential. But getting into ReOcupa is also smelling the food being prepared on the floors above, the cleaning products in use, listening to the children playing, watching the weather wearing away from a once abandoned public building. All very far from the traditional and sanitized spaces of art. All much more powerful.

Not only is the environment libertarian, but the curation strategies themselves, starting with selecting the name of the show. As you descend from the first floor to ReOcupa, you can read the message exchange in the group of artists participating in the show to choose the name. “It’s our fender,” explains Cuquinha, describing the assumed transparency process, even if the names are erased. The important thing is the process after all.

Most of the artists present there have collaborated in the occupation in an active and systematic way, whether in the kitchen or in other functions. But not necessarily. Who inaugurated the space, by the way, was the carioca Nelson Felix, last year, in parallel to his presence at the Bienal de São Paulo, at the invitation of the Apparel.

The current show took four months to conceive and, as the name implies, part of two very current issues: the forest as a space for survival in the face of burning and indigenous genocide, and the current political prisons, which range from Lula to other leaders. popular, such as Preta Ferreira, daughter of Carmem Silva, of the MSTC.

Not surprisingly, obviously, Lula, Carmen and Preta are remembered in this scenario, present in several works, including works by Suspresa de Uva, the name given for when the authorship is not essential and a work is created collectively.

But what is really important is to understand how this exhibition starts a new artistic positioning key, stimulated through a collaborative network outside the traditional institutional circuit and away from the conventional commercial circuit of galleries and fairs, because there are works sold to maintain the art. space and aid to occupation, pointing out that it is possible to rethink the relationship of sales in art. In this sense, Galeria ReOcupa adds to other strategies involving artists, such as Casa Chama, in São Paulo and Lanchonete <> Lanchonete, in Rio de Janeiro. If present times seem like constant nightmares, “What is not forest is political prison” shows that the dream still has room and can be viable. And Dona Irene still says goodbye smiling with an invitation: “Come back always!”