Thus, those who visit Entrevendo, at Sesc Pompeia, one of the greatest exhibitions ever held by Cildo Meireles, 71, will come across paradoxes, ambiguities, ironies, contrasts and concerns that run through the 150 works of the exhibition, curated by Julia Rebouças and Diego Matos. In works in various supports, languages ​​and scales, scattered throughout the vast spaces designed by Lina Bo Bardi, the arprojetist presents a production that activates, expands and shuffles the senses, as Rebouças explains. “It is a ct that deals with the idea of ​​meaning from its multiple definitions. Thinking not only of these perceptual capacities linked to touch, hearing, sight, smell, etc., but also thinking of sense as a measure, as direction, as balance, as a sense. And it is very important to understand that in Cildo’s work these forms of perception of the world are affirming themselves, but they are also contradicting each other, challenging each other”, she says.

Entrevendo, the work that names the exhibition, proposes that the public put two ice stones, one sweet and one salty, into a large cylindrical installation and walk towards a hot air source. The work, designed in 1970 and first performed in 1994, triggers different sensations and forms of understanding in the visitor’s own body as it deals with the contrasts between sweet and salty, hot and cold, light and dark. “And interestingly, it is a job that requires very little vision. The idea that vision is the primordial sense of artistic experience is very much challenged in Cildo’s work”, says Rebouças. The artist agrees: “At the beginning of the last century, Marcel Duchamp was already talking about the intention of liberating art only from retinal rule. Here in Brazil, since the 50s, especially since neoconcretism, this has become a very important thing. Exercising this multi-sensoriality has become a specificity of Brazilian production based on Lygia Clark’s Oiticica… And some of my works also deal with it”.

The contrasts, ambiguities, paradoxes or subversions, which are also invitations to the imagination, are notable in other works that sometimes make explicit these characteristics in their own titles. In Blind Mirror (1970), made of a gray and misshapen mass without reflection; Descala (2003), with dysfunctional stairs; Virtual Volumes (1968-969), in drawings that present volumes without physicality; Invisible Sphere (2012), with an aluminum box that, when opened, suggests a sphere due to the internal absence of material; Obscura Luz (1982), in which a shadow forms the design of a lamp; in the series of zero notes or coins, which question the relationship between real and symbolic value and explain that the value stamped on money is an abstraction; or in works such as The Shortest Distance Between Two Points is a Curve (1976) and in the works of the Physical Art series (1969).

The Blindhotland series, in turn, with three works on display, confuses the visitor when his vision is “betrayed” by the appearance of the objects. In the famous Eureka / Blindhotland (1970-1975), for example, dozens of balls of the same size, color and shape – scattered for manipulation by the public – have significantly different weights; In Blindhotland / Ghetto, otherwise, balls of different sizes have the same weight, again creating a kind of cognitive confusion that defies the senses. Like them, several other works of the exhibition invite the visitor to interaction, to an experience that comes through participation, dialoguing with what Cildo calls the “seductive character” of the visual arts.

“I think it has two characteristics that the fine arts should preserve, two aspects that should never be overlooked. First is the character of seduction. I think in a way conceptual art at first tried to clean it up, make it aseptic, and you lose your chance to deal with the seduction content a job might have”, says the artist. “And the other thing is that the fine arts is an activity that allows every new idea to start from scratch. You want to make a movie, you can have a thousand ideas and ways, but that without pre ends in the frame. In fine arts there is no such thing, you can take anything of any kind with any material using any procedure, and you get to the final work”, he says, also explaining that he never had a definite method of production.

Both seduction and the variety of materials and languages ​​are also present in works that deal more explicitly with socio-political and economic issues, and deal with memories that are repeated in Brazilian history. In Mission / Missions (How to Build Cathedrals), thousands of coins scattered across the floor connect, through a column of stacked wafers, to the bones hanging from the ceiling, creating an “anti-cathedral” that denounces the violence of colonial exploitation and its thirst for financial accumulation. “Indigenous extermination, this truculent history, this is a question that persists over time. When I did this work in 1987, thinking of the Seven Mission Peoples of the 17th century, I was speaking generically about this process of annihilation. But it ends up falling like a glove to the current situation”, says the artist, without losing, however, the hope that there may still be justice. “But sooner or later the responsibility for these crimes will fall on the perpetrators”.

The feeling of contemporaneity that runs through the exhibition, according to Rebouças, is a consequence not only of the choice of works that dialogue with “absolutely unresolved issues”, but “the result of a very complex and forceful production, of Cildo’s ability to manage affections rather than responding to specific events. He is responding to a feeling that was shared in another moment and is still shared today”. And this does not refer only to Brazilian history. Among the works that deal with the colonial structure are also Olvido (1987-1989), in which thousands of candles and ox bones surround an Indian-style tent – lined with money notes, and Amérikkka (1991/2013). Referring already to the title of the far-right terrorist and supremacist organization Ku Klux Klan, the installation creates a tense atmosphere by placing the public on wooden eggs, on the floor, and targeted by gunfire projectiles attached to the ceiling.

Like Amérikka, the show features a series of other works that have never been exhibited in Brazil, or that have only been presented in the country for a long time. According to Rebouças, at least two generations have not had contact with a wide cut of Cildo’s work, since the artist’s last major exhibition in Brazil toured the Rio de Janeiro and São Paulo MAM in 2000. Little interest in setting up exhibitions – at least today – Cildo says that one of the reasons that attracted him in the proposal was the location of the show at Sesc Pompeia, where there is a large circulation of people of all classes and ages and free admission. “This characteristic of Sesc, which is a deep respect and interaction with the surroundings, with the community, also brings an audience that is not specialized, specific to the fine arts. And this expansion interested me”, he points out.

Parallels with the dictatorship

It is not only between the present day and colonial history that Entrevendo draws parallels. A strong performer during the years of the military dictatorship (1964-1985), Cildo is emphatic in denouncing the abuses of the current federal government and the similarities with the military period. “But the current one is even more sinister and more ridiculous because it is paradigmatic ingenuity”, he says. The repetition of the history in the deaths of journalist Vladimir Herzog in 1975 and Councilwoman Marielle Franco in 2018, both fruits of political persecution, appears in the famous Insertions in Ideological Circuits, a series started by the artist in 1970 and developed to this day. .

By stamping, during the dictatorship, cruise bills with the question “Who killed Herzog?” and, nowadays, real notes with Marielle’s face, Cildo proposes to rotate symbols, social criticisms or slogans on objects of the everyday life (the project began with returnable Coca-Cola bottles), creating a kind of counter-information network in pre-existing circuits. As the artist himself explains, the Insertions have the ability to give a “voice to the individual in the face of the macrostructure”, in addition to raising questions about artistic authorship and the place of the artwork, outside of specialized environments.

Although resistant to any framing of his work as “engaged art” – “I have disgust for pamphleteering art”, he said once said – Cildo is not afraid to highlight the political concern present in his work. And tell how it came about. “It was in 1969 that I felt compelled to deal even more strongly with political issues”, he says about the year he participated in a show where the Brazilian representation for the Paris Biennial Youth would be selected. “Three hours before the inauguration, with the exhibition already set up, DOPS agents surrounded the Rio MAM building and demanded the cancellation of the exhibition. There was even the beginning of a military police inquiry involving all the artists. And I, who in that exhibition had formal works, without political nature, from then on I felt almost obliged to refer to these political issues in my work”, he recalls. 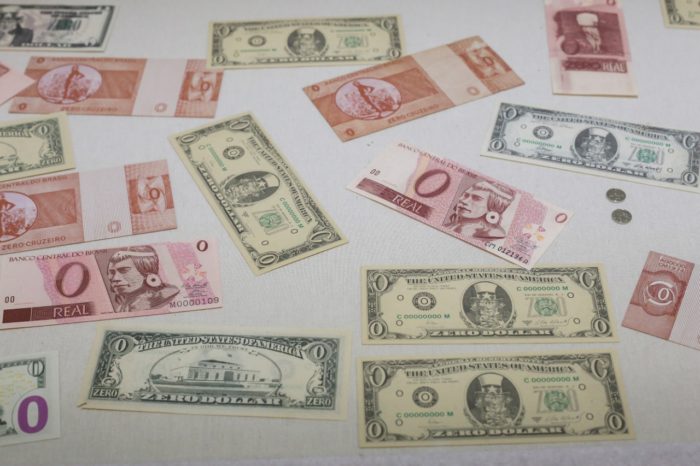 Relating the current context and the dictatorial period, the artist is outraged by recent episodes of censorship and the kind of treatment culture has received from the government. “We’re witnessing this kind of thing, an idiot like this guy who was from Funarte (the current secretary of culture Roberto Alvim) has come to the public to say that Fernanda Montenegro is nasty and liar. She, who is a kind of national treasure. And some guy comes and thinks he can defecate in public. This has become the hallmark of this government”. And he concludes: “But there is a physics law that says that every compression corresponds to an explosion. So the more you squeeze something, the more it will provoke a reaction, that’s a basic thing”.

Paradise must be defended