The journey of artist Aline Motta looking for her roots and the vestiges of her ancestors is undoubtedly a personal endeavour. The result, however, concerns the collective memory of thousands of Brazilian families built (or destroyed) in the violent process of the country’s formation, based on slavery and patriarchal structure.

“It took a while for me to acquire some maturity and psychic centering to deal with issues so deep and difficult that concern my own history and family,” she says in an interview with ARTE!Brasileiros. This maturation time included not only some early artwork that dealt with other topics, carried out especially from the beginning of this decade, but also a vast trajectory as a continuist in movies, wich commenced in 2001.

It was from 2016, when she had the project Pontes sobre Abismos (Bridges over Abysses) selected by Itaú Cultural’s Rumos program, that Motta, now 45, began to devote herself full-time to authorial work, with a multimedia production that did not leave aside cinema, but also unfolded in installations, photographs, texts, publications and performances.

In addition to the project for Rumos, works such as (Outros) Fundamentos, [(Other) Fundamentals], Se o Mar Tivesse Varandas (If the Sea Had Balconies), Filha Natural (Natural Daughter) and Jogo da Memória (Memory Game) – the latter, winner of the IMS’s ZUM scholarship and still in development – led the artist to several cities in Rio de Janeiro, Minas Gerais and Bahia and to overseas crossings to Portugal, Serra Leoa and Nigeria. And they deepened, in different ways, a research on Motta’s family history and, at the same time, on African heritage in the formation of Brazil.

Last September the artist was awarded, alongside Dalton Paula, Dora Longo Bahia, Ismael Monticelli and Rodrigo Bueno, with the Marcantonio Vilaça Award, in its 7th edition. In this context, ARTE! Brasileiros talked to Motta about he trajectory and production. Read below.

ARTE!Brasileiros – Your work seems to have moved, over the years, more forcefully to social and political discussions. They were not absent previously, but seemed less explicit than formal and language concerns. Does it make sense to think so? How do you see that trajectory of yours?

Aline Motta – Certainly discussions around racial issues were gaining body in my work gradually, as I felt more confident and prepared to address this issue with the rigour and research I thought needed. This took a while before I acquired some maturity and psychic centering to deal with issues so deep and difficult that concern my own history and family.

Through a personal research, on family memory, you also deal with a vast universe of collective memory, which has to do with historical violence in the formation of Brazil, with slavery, with patriarchate. I wanted you to tell a little bit about this research and what did you found out from it.

The research began based on the genealogy of my own family, in this case I am the result of an interracial marriage. It soon became apparent that genealogical research on white family members could continue ad infinitum, since many were cousins and married each other, in line with the common arrangements in which many families of Portuguese origin were formed in Brazil. In relation to the black family, I had to look in not so obvious places, but I found, for example, plenty of documentation on slavery in Vale do Paraíba, going against the idea that these papers were burned. They weren’t. So it is urgent that this documentation be made visible and critical studies of iconography are done, especially that of the 19th century, so that no one else can feel the right to propagate untruths or minimize the effects of slavery in our country.

In an interview, you stated that we are a violently racist country and that few reparatory measures have been implemented over time. To what extent would you say that art can also play a reparatory role, whether in the sense of “doing justice” or on the path more of healing?

Perhaps a work in visual arts can awaken in a certain audience some deep connections, which can lead to some understanding about personal, family and collective traumas. Yet it’s something restricted and the visual arts are still a very elitist field. That is, talking about healing does not realize the complex ways of being and being in the world that we need to face on a daily basis, often embracing a series of contradictions just to keep us alive or behave as expected of us. In relation to the concept of “justice”, I am quite skeptical, since at all times we need to explain the obvious in relation to reparatory measures such as racial quotas, for instance, and yet these few measures are harshly contested.

In your works that dealing with memory, it is also remarkable the place assumed by the “gaps” and the”erasing”. How do you deal with these gaps?

From the moment gaps arise, it is up to our imagination to create a past and a future for this lack.

To what extent would you say that erasure and manipulation of history and memory are perpetrators of violence and inequalities in Brazil even today?

The purposeful way this deletion is done daily in our society is just another factor that explains why certain families continue to send in this country since the Capitanias Hereditárias( Hereditary Captaincies).

Both with regard to racism and machismo, two themes very present in your work, there seems to be a very complex picture in Brazilian society today. If on the one hand black and feminist movements have gained strength and prominence, on the other we see a conservative movement of strong sexist and racist profile having also more and more space. How do you see this moment?

I hope that these conservative movements that actually attempts against life – at the end these are death discourses – they will turn against themselves. Realize that black culture in our country is a culture of resistance, therefore of affirming life and emancipation of being, through collectively lived processes. This goes in the opposite direction of these movements of deeply individualistic, narcissistic, militarily hierarchical motivation, which do not take into account life in common.

In your work you use different languages and supports – photography, video, text, performance, documents. I wanted you to tell a little bit how this job is going. Typically, the themes to be worked on, the supports appear first, or is each case different from each other?

I think the works are truly interdisciplinary, bringing together various fields of study and artistic knowledge, reflecting my formation a little out of standards and that it also does not follow a linearity. So it’s natural for me that the work unfolds into various supports over a long time, which sometimes gives me the feeling that I’m building an extensive and unique job. 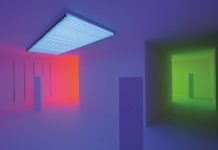