“ABOUT DRAWING IN BRAZIL”, a book organized by Claudio Mubarac and recently published by the Escola da Cidade publishing house, bridges a gap, bringing the reflection on drawing – which is usually relegated to a secondary position in arts education in Brazil – to the place of protagonist. Bringing together sparse texts, representative of different historical moments, and a powerful set of images, the work brings a selection of seven studies on the subject. this dive is greatly enriched by the option to accompany each of the essays with works of close artists – in time and style – by the authors of written analyzes.

The choice to merge image and text, in this order, is a kind of positioning, a way of putting theoretical discourse and artistic work on an equal footing. Thus, thought-provoking dialogues are established between Joachim Lebreton and Jean-Baptiste Bebret; Rui Barbosa and Henrique Bernardelli; Mario de Andrade and Lasar Segall. In the cases of Lucio Costa, Vilanova Artigas and Flavio Motta, they are authors of both written reflection and accompanying drawings, further deepening the intelligent relationship between the two forms of expression proposed by the work.

The opening reflection, essential for all who study the history of art in brazil, is the detailed project presented by Joaquim Lebreton, head of the french mission, in 1816 and unpublished until 1958. addressed to the count of barca, the writing presents a detailed proposal. for the foundation of an education system in the country. it is actually a project with two bases: it defends the creation of an imperial school of fine arts and also a lyceum of the arts – that would only exist decades later. he argues for the need to stimulate, at the same time, the science of drawing as the basis of art and as a vital technique for the formation of a skilled workforce.

similar questions run through the subsequent texts. the writings of ruy barbosa and lucio costa, related to educational reform projects begun in the 1880s and 1930s, respectively, also emphasize the need to incorporate the art and tool of illustration, sketching, and design into youth education, enabling not only to technique but to a formal sensibility, developing an aesthetic quality whose germination is necessary for the not only economic but cultural progress of the country, which longed for accelerated national updating and modernization. 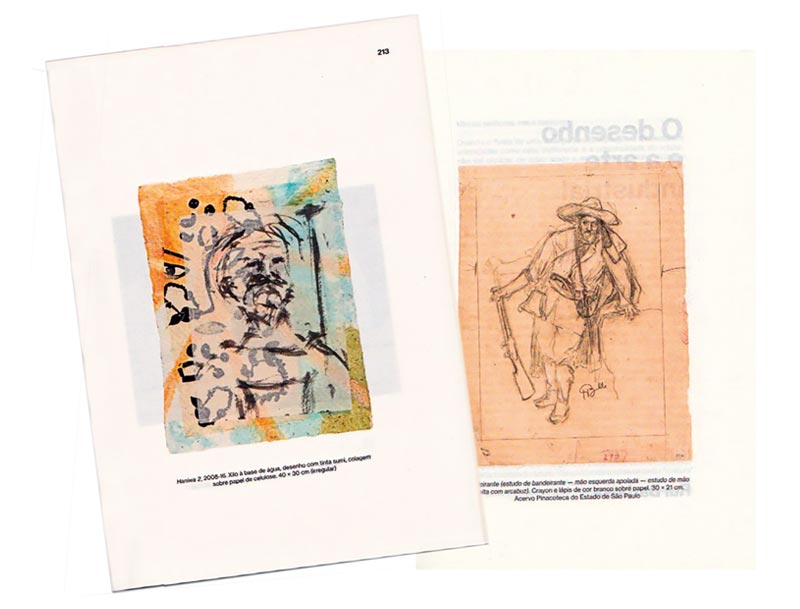 Mario de Andrade, Vilanova Artigas and Flávio Motta, the authors of subsequent essays, adopt differentiated and complementary points of view. what fascinates mubarac in andrade’s essay on lasar segall is his poetic tone, his boldness in trying to scrutinize the relationship between visual work and writing. “if for lucio costa, scribbling is not drawing, for mario de andrade,” exemplifies the artist and teacher at the school of communications and arts (eca-usp), who has long panned texts and reflections on the subject. “i’m not a theorist, i’m a draftsman who likes to study,” he jokes.

The appreciation of diversity, the importance of considering the different ways of thinking / making / tracing images, gives emphasis to the essay of conclusion of his own, whose starting point is the effort of synthesis for a class on drawing, given in 2017 at the city school. for this closing text, the selection of graphic works to which it relates is even wider. it includes visual essays by eight contemporary artists, with whom the artist and teacher have been maintaining an intense exchange about graphic making for decades. they are alberto martins, elisa bracher, ester grinspum, jose spaniol, madalena hashimoto, marco buti, paulo monteiro and paulo pasta. the diversity and complementarity between them only reinforce the idea expressed by the author, regarding the complexity, centrality and diversity of the theme, which can neither be reduced to a single point of view, nor considered as something in decay, inexorable victim of profound transformations in our visual culture.

although diagnosing that in the second half of the twentieth century there was a decline in theoretical production on drawing (the task of gathering reflections on the issue was not easy), the 21st century appears, according to him, with a renewed view. “when i look at art, architecture and design courses and speeches, i see that drawing remains firm and strong, as praxis and as reflection,” he concludes.