The opening of SESC new buildings, such as the newly opened space in Guarulhos, not only increases the network of people served, offering the local population a wide range of assistance, sports and cultural services, as it makes possible something unfortunately still scarce in the country: existence of a generous and ample space that gives shelter to the artistic production, so that it is realized in direct contact with a more diversified public and often distant of the traditional circuit of museums, galleries and fairs.

Just enter the new building, which on its first weekend received 24 thousand visitors, makes people realize the importance of art in the overall context of the project. They punctuate the space, subtly or with an undisguised impact, works made especially for the place or selected by hand in the technical reserve of the institution. Signed by a very varied range of artists, the works are authored and diverse, ranging from anonymous craftsmen, such as the authors of ex-votos who compose a panel installed in the lobby, to important names of the contemporary scene. Altogether more than 15 authors, some with several creations (like Leonilson and Sidney Amaral), sign the works.

On the façade of Sesc, still outside, a large sculpture of Sérvulo Esmeraldo welcomes visitors. It is a piece of great simplicity that contrasts with its colossal dimensions, more than ten meters high: two squares, one white and one blue, which partially touch and activate the space around them, like drawings that are strive to acquire a three-dimensional force.

At the entrance, establishing a fine tuning with the aerated architecture by Renato and Lilian Dal Pian, was installed a monumental sculpture in plaster by Carlito Carvalhosa. With a shape similar to that of the hill of Sugar Loaf in Rio, and hung in the emptiness upside down, with the help of an iron structure and thick tie rods that connect it to the walls of the building, the piece attracts the perplexed glances, who wonder about the permanent and at the same time unstable and precarious character of a heavy and inverted mountain that floats in the air.

Although probably the most striking of the new building, Carvalhosa’s piece, Já estava assim quando cheguei, is not the only great work especially designed for space. In the same hall, occupying a long wall on the second floor of the building, is the panel created by Adriana Varejão. Composed of seven large circles with geometric and organic shapes, mural painting is part of a project already developed by the artist, which investigates the wide range of skin colors of Brazilians, the problematic issue of self-identification in a society marked by a strong , even if disguised, racism.

It is interesting to note that the choices of permanent works for the new space are not intended to reinvent poetics. On the contrary, the proposal enhances the reach of works of art – in large part by the prominence and generosity of space granted to them – without sacrificing their connection with the particular poetics of each of the authors. The grandeur and specificities of a cultural center of wide circulation do not lead to a dropping of the researches of the invited artists. On the contrary, it opens up to them a possibility of making feasible something that, in practice, is almost impossible in our dense and fragmented urban centers. This is the case, for example, of the giant painting Paisagem Desaguando, created by Janaina Tschäpe for the gymnasium and establishing an interesting visual parallel with the contiguous nucleus of the pools. Or the work of Eduardo Frota, composed of two enormous pieces that belong to his already known series of reels, located in the garden. The difference is that in this case it was decided to change the already traditional wood profiles by the steel, more resistant material for a long-term exposure.

It is curious to note how the artist achieves, despite the massive character of iron, a paradoxical aspect of lightness. In addition to the precision with which it is built, with a perfect fit of hundreds of overlapping steel slides, the sculpture is hollow inside, making it possible to see the sky through it and giving some transparency to the brutality of the metal. 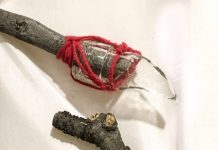 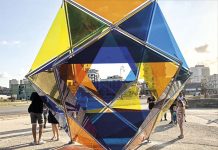 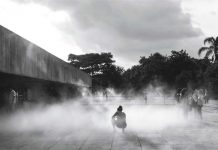 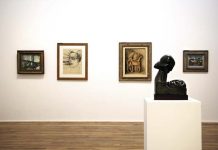 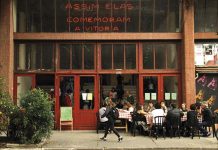 A place where to remember is to act