Tentacular, Paul Klee exhibition at Centro Cultural Banco do Brasil (CCBB) of São Paulo, presents a diversified portrait of the artist, allowing the expression of all his geniality. Of course, his role in modern art and his personal style – in dialogue with several of the hegemonic currents of the first half of the 20th century – are the basis of the exhibition, which features over 120 works. However, the highest quality of Equilibrio Instável (Unstable Equilibrium) lies in the strategy of show not a single and coherent trajectory of the painter, but rather illuminate different aspects of his life and his work, composing a panorama – evidently not exhaustive – of the multiple issues that Klee and his time holds dear.

So, what could be a traditional retrospective that countersigns the official narrative about the trajectory of an artist deeply coherent and prolific,  spreads by research, themes, techniques and different times. This approach by chapters, which respect a tenuous chronology, also answers to the difficult architecture of the space, fragmented into multiple rooms disconnected from one another. With this, the visitor follows the artist since childhood, on a set of simple drawings, representing, for example, family Christmas scenes. The presence of such pieces in the exhibition can be explained by both the importance of the Zentrum Paul Klee (a Swiss institution organizing the show and depository of his work) for the preservation of his story, and the curious fact of the painter himself have included these work, that at his discretion would already presents “productive autonomy”, in comprehensive record that kept the entire life of his production.

The visitor will little by little accompanying his walk, and witnesses through selected works his desire to improve himself in the academic study of the human body (which had already cost him a spot at the Academy of Fine Arts Munich in 1898) and the subsequent liberation of an art that only reproduce the visible; the interesting studies that performs in the first decade of the 20th century, receiving the title of “Inventions”, in which creates strange figures, early surreal, with some irony and acidity; the importance of travel such as those made for Italy (1901), France (1912) and particularly to Tunisia (1914); the presence of the family (in the pictures and the puppets made for his son); the discovery of color; and the intense relationship with other forms of artistic expression such as music and theater.

The movements are complementary, combining importante biographical facts  with its main veins of research and study, such as the works of more expressionist bias, developed in the years 1910 (when participated in the Der Blaue Reiter group, with artists such as Kandinsky and Macke) or the persistent drawings of geometric models that performs in several years that he was a professor at the Bauhaus, period in which devotes itself to understand and synthesize the formal relations of plastic representation. Sometimes the visitor is placed in contact with works that mark his relationship with the world around, and in other faces the result of a constant effort to dominate and create a new art. Disciplined to the extreme, Klee was by standard does not pass a day without trace a line.

Despite the importance normally attributed to the artist’s contribution to the development of abstraction in modern art, few were the opportunities of the brazilian public to get a closer look at his production, as shows Roberta Saraiva Coutinho in a study published in the catalog of Unstable Balance .Such absence is even more strange if we take into account the major influence – formal or theoretical — of their research in local modernism, at a distance dialog that  Zentrum Paul Klee aims to map better and present in the future to the swiss public.

The exhibition mostly account with drawings (80% of his production is composed of works on paper), among which we can highlight a striking image group, outlined quickly in the heat, in which he comments with acidity the tragic events leading up to World War II. These almost caricatures, in chalk on cardboard, show scenes as the repulsive figure of the dictator or the horrors experienced by immigrants, by persecuted by Hitler’s regime and that are part of a set of about 250 illustrations. Klee himself was victim of Nazism. In addition to have his works included in the exhibition of “degenerate art” organized by the Reich in 1937, he was appointed as a Jew, had his house searched, lost his job and was forced to take refuge in Switzerland, his country of birth, in 1933 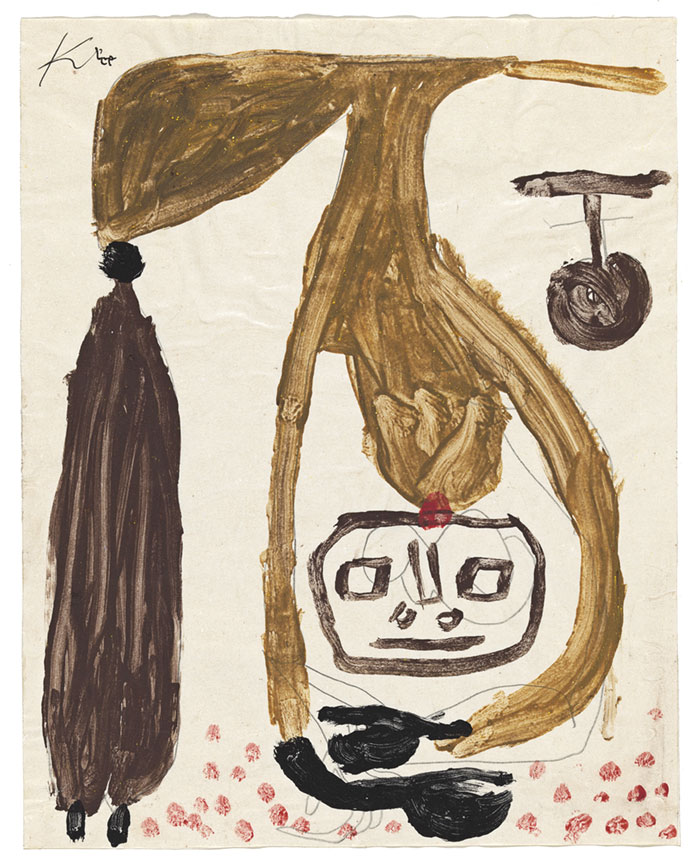 Another group of works that deserves attention is the set of drawings of angels, at the same time humans and supernaturals, fallen and beautiful. There is for example Angel Forgotten (1939), whose delicacy and modesty – with the hands and wings together – is touching. Is also present in the selection, which after São Paulo follows for units of the institution in Rio de Janeiro and Belo Horizonte, the most celebrated angel of Klee, Angelus Novus, (1920), entering history as the emblematic image of the theses on the concept of history of Walter Benjamin. Purchased by Benjamin in 1921, the work belongs to the Israel Museum and rarely travels, but the Zentrum Paul Klee made for the exhibition a faithful and certified copy that, according to the German philosopher, works as an allegory of the story, which see with horror the destruction of the past while being propelled into the future by this storm that “we call progress”.

The “confluence of the connection between a worldview and the pure plastic exercise”, as defined by the artist himself, meets its synthetic expression in works such as Crossed Off the List. The screen, painted in 1933 brings the image of a man, quite possibly a self-portrait, a man profiled, sad face, with a cross over his head and the weight of the world on his shoulders. “Klee always attempted to unite creative relations, content and form, with existential issues, ideological, ethical,” synthesises Fabienne Eggelhöfer, curator, reiterating the idea of balance expressed in the title.