It is limiting to attribute to the pair Angela Detanico and Rafael Lain separately a formation when speaking in its artistic production. It is truer to say that both are linguists, graphic designers, typographers, and semiologists. And, of course, artists. After all, for more than 20 years together, since they migrated for the first time, from Rio Grande do Sul to São Paulo, everything that was learned was shared. So much so that it is admirable even to complete the other in a precise way when a word escapes reasoning, although words can hardly escape the duo that dominates it.

“A big part of our production is the creation of typographies, of writing systems, we are very interested in the codes, the alphabets from different places in the world”, says Angela. The show at Espaço Cultural Porto Seguro, in São Paulo, which extends until April 7, gives the dimension of this in the work of the duo.

Now married and with two children, Rafael and Angela live in Paris and are part of a select group of artists, watched closely by collectors and institutions from around the world. The art became their final dedication when, in 2002, they received a scholarship at the Palais de Tokyo. Already worked with graphic design, developing projects and visual identities.

Angela and Rafael commented that the idea to organize the show was part of a garden concept, but the Japanese, not the Parisians: “The ones from France are very organized for us”, she jokes and continues: “Although we are well organized in these works, but I think the garden experience corresponds more to the Japanese, a little wilder”. All works have some connection with light. After all, it is the light that indicates the passage of time, which pervades all works at some point. And it is the light that keeps a garden alive and strong.

The first works that the public finds when entering the exhibition in the ECPS do not yet give the exact tone of what will be found in the upstairs and the underground, besides the works in the outside of the building. Although everyone has a dialogue between them and start from codes, they do not invade and do not dictate a truism. Silence Waterfall (2018) was specially produced for the diagonal wall at the entrance of the site. Based on a photo of a waterfall that the pair visited in Kyoto, it is worked vertically on top of the pixel lines of the image, triggering the colors all over the wall, explains Angela: “It is a still image that is being shown little by little”. Rafael says that the sound that accompanies the work is the original Japanese waterfall.

Another work that represents an affectionate place for the artists and that is shown for the first time is From Luz to Paraíso (2018), that traces the route between the paulistanos districts, respecting the layout of the streets and the relief of the path. In the same environment, Ulysses (2017) is reproduced on a wall, a work in which a human figure defined by words walks, referring to the book of the same name by James Joyce. In the narrative, the main character walks through the city of Dublin for 18 hours, redefining its relationship with space (the city) and time. The text that builds the body on the wall is Joyce’s book, each step is an upset page.

This sense of the modification of space and time can be felt by those who visit the exhibition, which is always bringing the reflection on this temporality. And that is the intention of the pair, it can be said that they conclude this desire with success.

Also unpublished, the work Clouds of São Paulo (2018) hides a text by Oswald de Andrade, graphically transformed into cloud formats as they are blurred, moving through the huge screen on the mezzanine wall. Literature is very present in the life of Angela and Raphael, being a material of much research as well: “Our library is a very important part of our life”, recognizes Detanico. And language, whether by codes, pixels, words or images, pervades the whole exhibition. Everything is also linked to the origin of the couple, who began working together in the area of graphic design, especially with technology, in the late 90’s.

In the mezzanine, the artists explain the will to work using the architecture of the space in the construction of the landscape: on one side the clouds, opposite to the box. On the floor, the installation Salt Wave (2010), being a figure formed by the word “wave”, written in a code created by the duo: “A large part of our creation concerns the development of new typographies. We are very interested in the alphabets, the different forms of writing in the world”. The geometry of the letters in this alphabet creates different modulations for the wave.

In another wall, the public faces the 28 Moons (2014), a video installation where the figure is formed by the text (as in Ulysses). In the case, the figure of a moon is constructed by Galileo Galilei’s text the first time he observed the satellite, each of the twenty-eight minutes by which the video extends forms a state of the moon every 28 days of its variation during a cycle. Another experience with the moon awaits the audience in the basement: Lunar maria (2018) is a video installation that reflects on fabrics composed of garden stones the name of the seas present on the satellite, such as Sea of Tranquility and Sea of Islands. Light falls on positions of letters, like a drop, also in a code, forming the words and opening through the screens.

To bring a reflection on contemporary issues involving a geopolitical spectrum, Detanico Lain found it pertinent that the work White Noise (2006), which premiered during the Venice Biennale, was included in the exhibition. Closing the course of 14 works, several satellite images of a space of the Amazon Forest are placed in layers, this gradually gains intrusions of a white, being erased continuously, referring to the problems of deforestation and climatic issues: “If in 2006 this was important…”, Angela starts. “Now that’s urgent”, Rafael completes.

Half a century of records 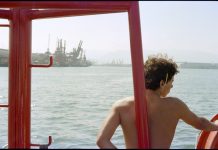