It was thanks to the Stanley Kubrick’s film “Eyes Closed” (1999) that a Brazilian of Finnish family Marianne Soisalo created one of the most radical artistic residences amid the exuberant nature of Alto Paraíso de Goiás mountains, 230 km from Brasilia, in the Chapada dos Veadeiros.

Living in London in the 1990’s, Mari, as she is called by her friends, was one of the owners of the cabaret Madame Jojo, who was rented by Kubrick to record one of the scenes from his film when the character played by Tom Cruise meets his musician friend.

“With the money from the rent, she bought the land where the residence now operates”, says artist Rodrigo Garcia Dutra, who since last year has shared the responsibility for the ALTO residence with Mari.

Although the film was shot at the end of the last century, the land in Alto Paraíso was acquired only in 2008 and construction began in 2011. In the meantime, Mari, an environmental activist with a master’s degree in zoology from Cambridge University, slept in Bruce, her Land Rover, when she was in the region.

At the site, she had two houses built on separate trees, planned and built by a German specialist, one of them 30 meters high. The view from there is breathtaking, with blue macaws flying over the area. These homes are the home base of the Mariri Jungle Lodge, a creative home and a permaculture project space. It was along with the artist Karolina Daria Flora and the Spanish artist Rafael Perez Evans, currently living in London, that she created the ALTO, receiving artists both by subscribing to www.altoartresidency.com and by invitation, which has been organized by Dutra and Mariana Bassani.

The artist went to live in Alto Paraiso in 2017 to work at the Art and Education Institute of Goiás Department of Education and operate with art in public schools and a settlement of the Sem Terra. “After five months in the public service I decided to leave, and since I was in contact with Mari, I ended up getting involved in the residence”, says Dutra. Having graduated from the Royal College of Art in London in 2014, he returned to Brazil to attend the Histórias Mestiças show the same year at the Tomie Ohtake Institute, and eventually became involved with the Huni Kuin Indians, who were there for a ritual of ayahuasca in the work of Ernesto Neto. “Because of this tea, I decided to go back to Brazil”, explains the artist.

ALTO is a very private residence, with an open stay, because it’s aimed at artists who are involved with the land and with sustainability. This is the case, for example, of the English writer Olivia Sprinkel, who will spend some time there in the coming months, writing about global warming.

However, it’s not only activists who are invited, but also those interested in the theme, such as the artists Manoela Medeiros and Romain Dumesnil, who spent two weeks there last year invited by Dutra. Together, they have the Átomos, an autonomous art space, in Rio de Janeiro. The artists Marcia Ribeiro, Julie Beaufils, Daniela Fortes and Bia Monteiro have already passed through the residence at the invitation of Dutra, and in 2019 the artist Ivan Grilo is scheduled to arrive.

“I think it is important to move the spaces of production and reflection in art out of the big urban centers”, defends Dutra.

One of the works created by Medeiros in the residence is a rereading of Walking, emblematic work created by Lygia Clark, in 1964, in turn an appropriation of the tape of Moebius, where inside and outside constitutes like same space. While Clark’s work is on paper, Medeiros’s review is with Bananeira tree leaves.

While on the one hand the experience in Alto do Paraiso is dazzling because of the diversity of the region’s forests and waterfalls, it’s also challenging in the face of conflicts with agribusiness. He was probably responsible for the fire that occurred in October 2017, which destroyed 35,000 hectares of savannah vegetation in the Veadeiros National Park, soon after its expansion by about three times. It is speculated that the fire, started at the same time in many different places, would have been a counter-offensive of the farmers.

With this situation of polarization, which is the portrait of Brazil today, ALTO becomes an experience of immersion in an ecological sanctuary that, far from being mere tourism, is, after all, another way of experiencing the most central conflicts and dilemmas in the country. 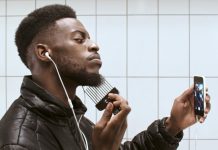 Under the lens of Bárbara Wagner and Benjamin de Burca 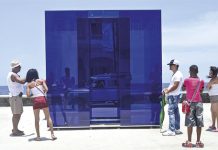